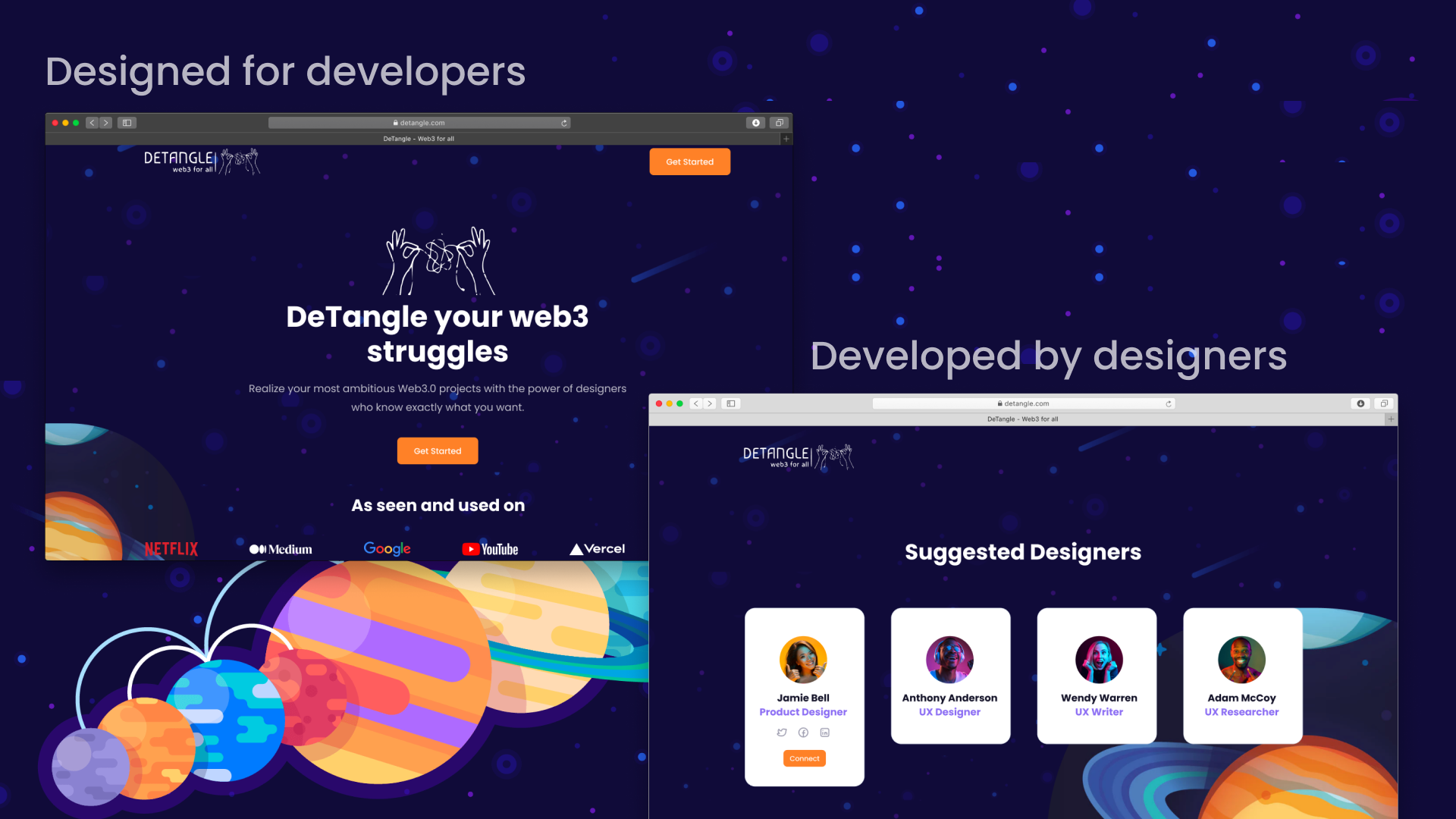 DeTangle - Web3 for All

Designathon by Avocademy
Project Overview
How can you design for something we know so little about?
‍
The new age of the web is upon us and with Web3 being the new buzzword of the tech industry these days, it is no surprise that more and more people are getting invested into the space. But at the same time, why is it so hard to learn more about it..?

In this designathon, we aim to improve Web3's accessibility by connecting developers and designers who have the average user in mind. By using a more human approach to problem solving, we take steps in developing a new safer era for the web for everyone.
Click here to jump to final prototype ↗
‍Project Type: Duo project with Kefei Zhang

How might we better connect blockchain developers and designers to build a safer and more accessible user experience for the Web3 space?

In a new modern age filled with buzzwords, it can be easy to get lost in it all.

A new digital age is upon us and while concepts such as an alternate universe is not new, it is fair to say that technology is finally catching up to our imaginations - and it's about time we talked about it. While we are on the cusp of realizing a new age in the web space, we are now at an awkward tipping point of adopting this new type of technology that we need to introduce for the average user to let them know that these new platforms can coexist with the Tiktok, Twitter and Instagram they are used to seeing.

With Web3 being only in it sprouting phase, it is no surprise that there is a general sense of public interest. However, only a small portion of web users engage with Web3 content. Why is that?

The Short Answer: The User Experience

Throughout this project, we discovered that while user-centricity is the key to determining the success of new startups within the Web3 space, it is a subject that is severely overlooked during a platform's development which ultimately spirals into the downfall for many Web3 startups. A user experience is a two-way journey and bridging the unknown with the familiar is one of the many ways we can ease the average user into adapting new technologies within the future.

DeTangle aims at solving that by using AI to connect developers with designers who have the user in mind.

DeTangle your Web3 struggles with ease 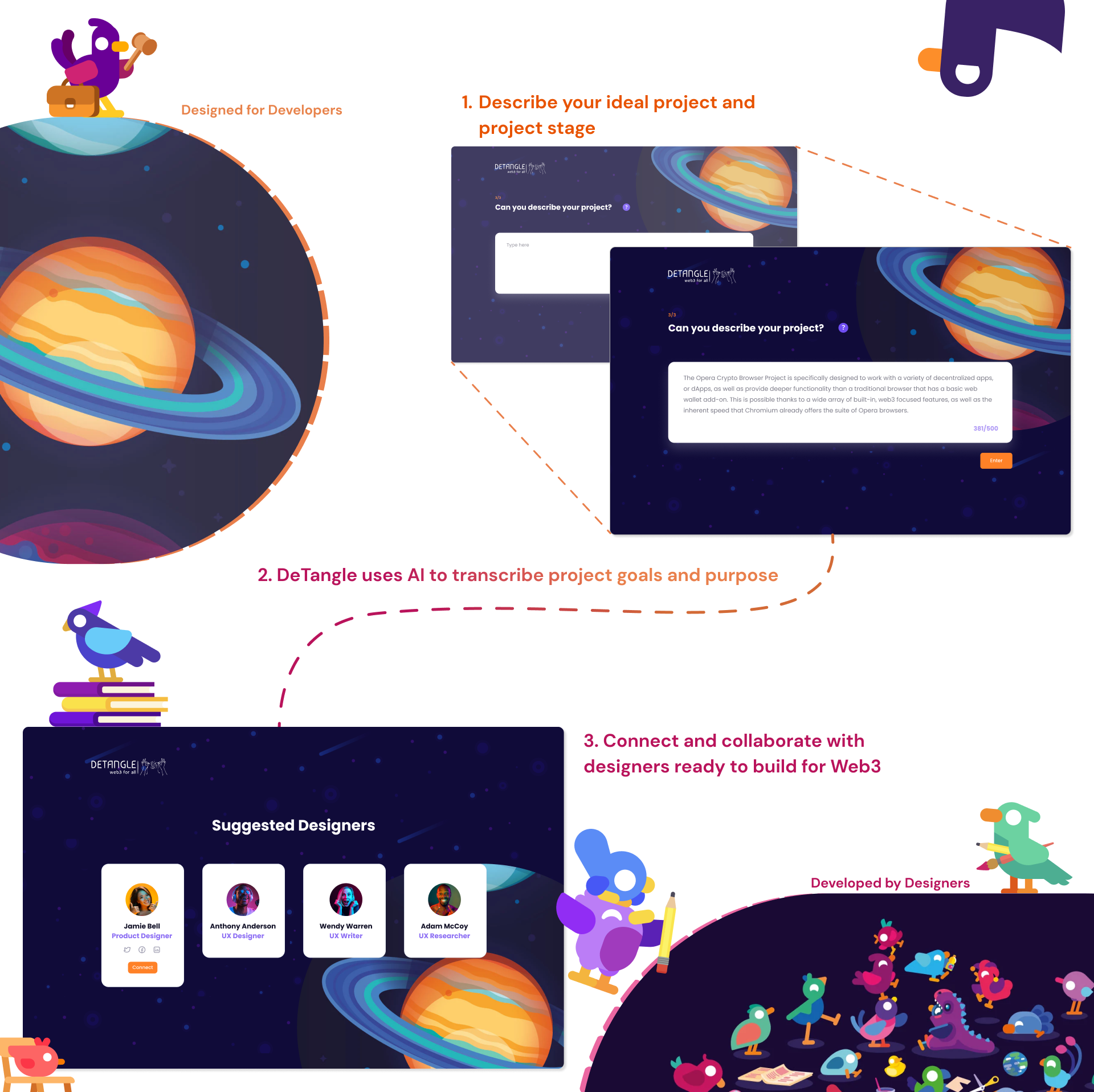 We hope that DeTangle serves to be a platform that developers can use to realize their most ambitious ideas but that isn't where it stops.

With Web3 growing ever so steadily in popularity, it is also our responsibility to educate our users about the risks that come with every platform. As much as we want to see projects thrive and product designers becoming more involved with Web3, we also want to have a positive and safer outlook for our future users while maintaining inclusivity and accessibility. We hope that in the future, platforms such as DeTangle can be a source of inspiration to guide Web3 projects to be more aware about the importance of a good user experience.

Key Takeaways and Next Steps

Building out an MVP

Limited time came with risks and more importantly, crucial decisions to make within our product design journey. Blocking out times to give ample space for us to define the problem and thoroughly ideate was prominent when it finally came to solution execution. Though we were able to build out a functional MVP, I would have liked to spend more time exploring more potential solutions if I were to do this challenge again. I believe it is important to be able to exhaust all potential options in order to get a better grasp on a more thought out solution.

As I grow as a designer, the execution aspect of the role seems to only get quicker and thus, for future projects with constraints such as these I will aim to prioritize the ideation aspects of the role more.

Challenging the unknown within a distant future

Designing for an unfamiliar space was both daunting and exciting. While there were other more familiar areas to explore within this designathon (such as designing for FinTech), I wanted to challenge myself and I was grateful that my partner was on board. Learning about an unfamiliar space within a span of 3 days was eye-opening in the sense that we were able to experience early Web3 projects in their early stages - seeing the growth take place in front of me. It almost felt as though being transported back to the early days of flash games and seeing their potential makes me excited for what's to come within this new digital age.

If you're on this page but liked the case study (and hopefully me as well), get in touch with me on: